I know I have been talking a lot about food lately, but it IS the holidays and good food is everywhere ! I just can’t help myself. I won’t be sharing any recipes today but I will be sharing some easy, fun foods that I love enjoying at any holiday party! I always have great ideas for parties and party foods, but when it comes down to it, I just procrastinate a little too long. These are some party foods that I can always turn to if I am running behind and looking for a treat that will be loved.

My first pick is so easy, yet so good. Pepper Jelly Dip is perfect for when you are throwing together a quick party or forgot to make a dish for tonight’s Christmas party. All you need is a block of cream cheese, a jar of pepper jelly, and some crackers to dip in it. Go ahead and bring a serving knife or butter knife because cheap plastic knives and a cracker won’t cut through the cream cheese easily.

Need I say more? So easy & you can find the recipe online for cooking instructions. These take a little more time to prepare, but they don’t require a lot of ingredients and they are a crowd favorite at every party we serve them at. You just need bacon, a pack of smokey sausages, brown sugar, and tooth picks.

Cody’s mom always makes these around the holidays. They are great if you have a sweet tooth . I have made them for teachers as Christmas gifts and we have served them at parties. You just use chocolate chip cookie dough and a peanut butter cup and place them in a mini muffin pan & POOF!! You have a perfect sweet treat for any holiday event.

Okay, so these are kind of hit or miss but my family and I love them. They are a staple at any family gathering. Once the eggs are boiled and peeled, the prepping process is so easy. They are a great finger food to have at any party.

Homemade cakeballs are always a hit. Never fails. You almost can’t mess this one up. They have to be baked and frozen, but they are so simple. The hardest part is the chocolate coating, but even if they look bad they are still usually a hit because they taste so good.

I hope some of these holiday food ideas save you at this year’s holiday parties. We love these items at almost every party and they are usually the things that people gather around and clear out before the party ends. If something caught your eye and you do want me to make a recipe post, leave a comment. Happy holidays ! 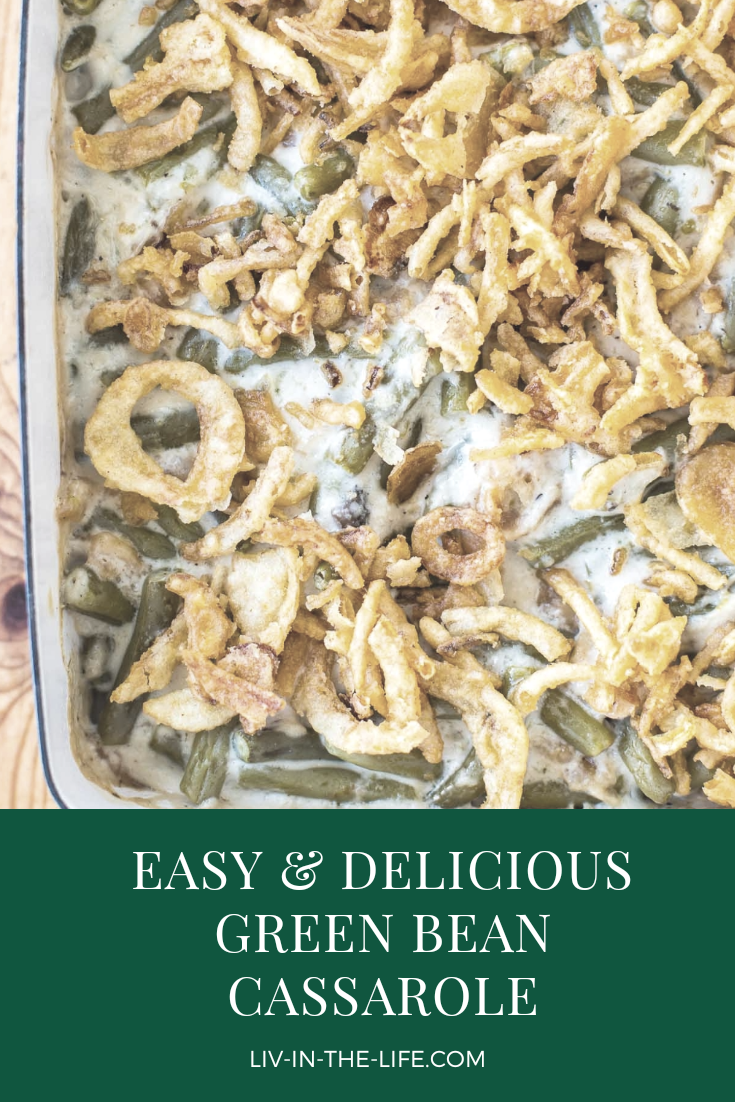 Time for another pre-Thanksgiving recipe! I can literally shovel this stuff into my mouth at any time of year…Green bean casserole! This is by far my favorite Thanksgiving food of all time.

3. Stir in green beans and 2/3 cup of crispy fried onions.

5. Top with remaining onions. ( I never measure this part. I just cover the top on the casserole completely)

6. Bake for 5 minutes or until onions are golden brown.

That’s it! Such an easy recipe and a crowd favorite for any holiday (or enjoy it any time of year!) I hope your family enjoys this dish as my as my husband and I do! November is here, which means that Thanksgiving is right around the corner. Thanksgiving holds a place as one of my favorite holidays. The food, the family gathered around the table, remembering to be thankful (something that I need daily)… how can you not love it? In honor of Thanksgiving and all the yummy food we are going to be enjoying, I will be sharing one favorite Thanksgiving recipe of mine each week. The first recipe is a Thanksgiving must have: pumpkin pie.

I am a firm believer that some things aren’t worth the time, trouble, or money to be homemade… sometimes a cheater recipe is just as good. You can also do this recipe without a crust, in a pie pan to make it gluten free.

.frozen pie crust (or not if you are making it gluten free)

.14 oz. can of sweetened condensed milk

3.Once ingredients have been mixed well, pour the mixture into the frozen pie crust. (or into the empty pie crust if you are trying the recipe gluten free.)

4.Put the pie in the oven and let it bake for 15 minutes.

5.After the pie has baked for 15 minutes, reduce the heat to 350 degrees Fahrenheit and continue baking for 40 minutes.

6.Once the pie has browned slightly, allow it to cool on the counter or a cooling rack before serving. (& don’t forget the cool whip when you are ready to serve!)

Thanks for reading along. I hope that this pie finds it’s way to your table and can be enjoyed by all of your friends and family. Thanksgiving doesn’t have to be hard or expensive… just keep that in mind. Happy baking! Make sure to follow the blog to get updates on future posts!

On July 1st, my husband turned 24. That Friday we celebrated by inviting some of his friends over for a small party and a blind frozen pizza taste test. In today’s post, I’m going to share how we did it, what the guys thought of each pizza, and what the end results were.

I bought five different brands of frozen pizza: Red Baron, Totinos, Freshetta, Great Value, and DiGiorno. I cooked all 5 pizzas (wrapping the ones that were cooked first in foil and placing them in a warming tray so they would stay hot.) When they were done we sat the guys down at the table and served them each a slice of the first pizza. They were not told what brands they would be eating before hand or while they were eating them. We served the guys one slice at a time and let them take their time tasting, commenting, and ranking the slice they ate. I asked them to rate it on a scale from 1-10 and wrote their numbers down. I got the final number for each pizza by adding up all of their responses . (For example one brand was rated 6,4,5 8,6. So I added 6+4+5+8+6=24 . So, 24 was the final score for that pizza.)

The first pizza that the guys were served was DiGiorno. The guys really liked it, but immediately guessed that it was DiGiorno. One guy said, ” I like the sauce, but it’s a little greasy.” Another said, ” I didn’t really like it, but it was worth eating. It was better than average.” The final score for DiGiorno was 24.

We then moved on to Great Value. Cody has eaten a double stacked Great Value pizza and liked it, so I thought it would be interesting to toss into the mix. This one was not a fan favorite. “This dough looks like it was microwaved, not like it was put in an oven.”, one guy said. Another said, ” This tastes like you got cardboard and soaked it in pizza sauce.” “If there was a pizza made for dogs, this would be it. This is nasty.” , another guy commented. The over all score for Great value was 11.

Next up on the tasting table was Red Baron. On a normal night this is our favorite frozen pizza to buy. Tonight, we saw that this pizza was average. (Cody claims it’s just because I cooked it wrong.) There weren’t many comments on this one. It wasn’t good or bad enough to get a comment out of the men. One guys said, ” This is better than the last one, but still disappointing.” The only other comment made said,”The first taste was terrible…but now it’s not bad.” The final score for Red Baron was a 21.

Freshetta was the next brand to be tried. It had the most positive reviews. The guys thought they wouldn’t like it because it sounded “healthy” , but it took them by surprise. In the cooking process, the pizza did burn a little but that did not stop the positivity. “This is quality pizza.”, was one comment. Another said, ” This one has a more meaty taste to it.” The final score for Freshetta was 32.

Next, we ate Totinos. Everyone knew what it was. It wasn’t truly in the competition, but we had to do it! Someone described it on point when they said, “It feels like we are trying to rate our childhood, not pizza.” Another said, “This tastes like Totinos, not pizza.” This one tied with our winner for number one with a high score of 32.

So, the end results for ojr pizza contest were:

This activity was so fun to work on and such an easy task to try at home. Thanks for reading along. If you have ever tried any of these pizzas, leave you opinion in the comments. And if this post inspired you to try a blind taste test at home make sure to let me know how it went ! Happy tasting!